Why Do We Get Algae Blooms?

Why do we get algae blooms in ponds and lakes?

What are Blue-Green Algae?
Blue-green algae (cyanobacteria) are natural inhabitants of many inland waters, estuaries and the sea. In freshwaters, they are found in suspension and attached to rocks and other surfaces at the bottom of shallow water bodies and along the edges of lakes and rivers. The range of blue-green algae in waters in this country is wide and includes single-celled species and
others whose cells are arranged in colonies and chains (filaments). Although the cells, colonies and filaments are not visible to the naked eye, it is possible to see some species when they are concentrated into clumps in the water.

Single-celled species form clumps, and the filaments of other species come together into bundles or balls. These forms can appear like greenish flocs, flakes of green sawdust, or like brownish pinheads in the water. When the numbers of blue-green algae are not excessive they, together with other algal groups, are important contributors to the aquatic biology of natural waters. They convert energy from sunlight into chemically useful forms, liberate oxygen into the water, take up minerals and produce substances which enter and support food chains. 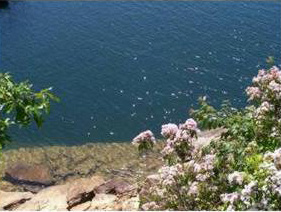 Like other floating plants, blue-green algae need nutrients to grow, particularly nitrogen and phosphorus. These substances exist in various forms in the water and can be utilised directly by the algae.

If the water is enriched with nitrogen and phosphorus and other requirements for growth are met - for example adequate sunlight, mixing, flow and temperature in the water-body - then the numbers of blue-green algae can become excessive. Such extensive growths are sometimes referred to as blooms.

Where blue-green algal blooms develop and persist, they can adversely affect the appearance, quality and use of the water-bodies. The water may be discoloured green, blue-green or greenish brown and several species can produce musty, earthy or grassy odours. Such algal blooms some-times cause foaming on the shore-line. When blue-green algal blooms die and decay, they use up oxygen in water which can cause problems for other aquatic life including fish.

During calm weather, several blue-green algal bloom forming species can rise to the water surface to form a scum. This may look like paint, jelly or floc. The colour of blue-green algal scums varies widely because the pigments they produce differ between species, and even within a single species, depending on the nutrient supply, light intensity and the age of the bloom. Consequently, scums may be blue-green, grey-green, greenish-brown or occasionally reddish-brown.

All blue-green algae contain blue pigment in addition to green chlorophyll pigment, although the blue colouration cannot normally be seen in the living cells. However, when blooms and scums decay, the pigments are released and a bright blue appearance may persist for days or weeks.

Blue-green algal scums can form quickly on calm days, but can be dispersed rapidly if wind and
wave action increases. If the direction of the wind changes, the scums can move from one shore-line to another in a water body in a relatively short time. The persistence of scums also depends upon the particular blue-green algal species within the scum. These species can vary considerably in their size and shape.

Home
Pond Support Which Product to Use Hydra Crystal for Beginners Before Treating Your Pond Why Do Ponds Get Murky? Why Do We Get Algae Blooms? Why Do We Get Blanketweed? How Much Oxygen Do Fish Need? Which Product Do I Need? . Questions & Answers Q&A About Ponds Q&A About Hydra Crystal Q&A About Hydra Quartz . Videos Crystal Video LT Extreme Video
About Us Ordering Information Shipping Information Contact Us
Pond Clear Products (423) 217-1332
1674 Highway 11-W
Bristol, TN 37620